In 1998 Grove City celebrated the 200th anniversary of its founding. During that year, many activities commemorated this anniversary. A book was produced, Reflections of Our Past: Celebrating 200 Years of Grove City, Pennsylvania. A play, Upon These Waters, was written and performed by members of the community. July Fourth was celebrated with a community band performance and fireworks.

During that year, the rich history of the Grove City area was rediscovered. Many citizens expressed an interest in preserving this local history. Some of those citizens suggested forming a local historical society in order to preserve the local history.

The Society was incorporated December 16, 1998. We received our tax exempt status June 3, 1999. We began with about 35 members and today we have more than 400 members. In January 2000 we received a donation from Grove City Borough of $65,000.00. This money was used to purchase the Traveler’s Hotel as our headquarters. We have many volunteers who welcome visitors and guide them on tours of our museum. We have done a tremendous amount of work on our building and we are very proud of all that we have accomplished. All of our workers are volunteers. We have no paid staff. Each of us enjoys our Historical Society and we are anxious to share the history of our community with others.

The work that has been done on the building has been made possible by grants from former State Representative Dick Stevenson, former State Senator Bob Robbins, and Alcoa Aluminum.

Our headquarters was formerly The Traveler’s Hotel. Prior to 1946, the Hotel was known as the Uber House, built between 1905 and 1910. Initially, it had a restaurant on the first level and sleeping rooms upstairs. It remained a hotel until the Historical Society took ownership of it in 2000. The Hotel was used for many things over the years. Olan Mills rented space in the basement to take family pictures. For many years a Doctor Slough rented a room two days a week to treat patients. Parents of college students stayed at the hotel; Street Fair vendors stayed, as well as traveling salesmen.

Although we have accomplished a great deal since 1998, we still have a lot to do. We are planning for our organization and museum to continue long into the future as we love out our goal is to preserve our past as we move into the future. 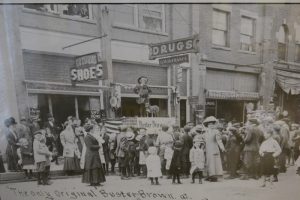 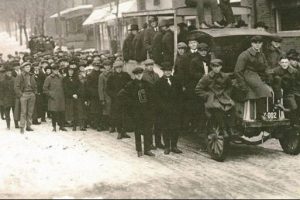